Akita is a shapeshifting creature who lives in the Never-Realm. She has the ability to morph between the form of a three-tailed wolf and a human.

Before the Ninja enter the Never-Realm, Akita gives a brief history of the Ice Emperor and his takeover of the Never-Realm; however, she believes someone will stand up against his evil reign.

When Lloyd went to search for Zane, he gets ambushed by some wolves, but Akita, in her wolf form, saves him, and he rewards her with his food before leaving. She meets up with Lloyd and helps him find the Land Bounty and the two become allies.

Season 11: Secrets of the Forbidden SpinjitzuEdit

Akita, on a Secrets of the Forbidden Spinjitzu poster

Akita on The Ice Chapter poster 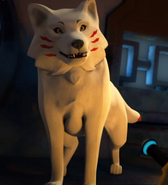 Add a photo to this gallery
"https://ninjago.fandom.com/tr/wiki/Akita?oldid=1539" adresinden alındı.
Community content is available under CC-BY-SA unless otherwise noted.