2111 Kai is a Ninjago Spinners - pilot episodes set that was released in January 2011. It is numerically the first non-promotional Ninjago set ever released, and it includes Training Kai, his spinner, a Golden Katana, a black Spear, a gray Double-Bladed Dagger, four Battle Cards, a Character Card, and three red bricks.

Spin your way to victory and become a Spinjitzu master! Quick to anger, even quicker to act and armed with his golden sword, Kai is ready to battle for weapons and glory! Use the 4 battle cards included in the set to influence the outcome. Set includes 1 minifigure, 1 orange fire spinner, 3 weapons, 1 character card, 4 battle cards and LEGO bricks. 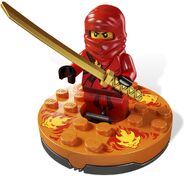 Kai on his spinner