2112 Cole is a Ninjago: Spinjitzu Spinners set released in January 2011. It includes Cole, his Spinner, a Katana, a Blacksmith's Hammer, the Staff of Dragons, a Character Card, four Battle Cards, and three bricks.

Spin your way to victory and become a Spinjitzu master! Calm, steadfast, very strong and armed with his golden staff, Cole is prepared to battle for weapons and glory! Use the 4 battle cards included in the set to influence the outcome. Set includes 1 minifigure, 1 green earth spinner, 3 weapons, 1 character card, 4 battle cards and LEGO bricks. 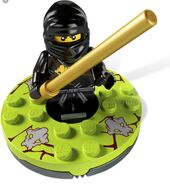 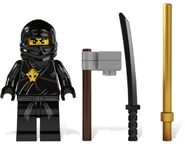 Add a photo to this gallery
Retrieved from "https://ninjago.fandom.com/wiki/2112_Cole?oldid=487260"
Community content is available under CC-BY-SA unless otherwise noted.