This article is about the set. For the Character Card, see here.

2171 Zane DX is a Ninjago Spinners - pilot episodes set that was released in March 2011. It includes Zane DX, his Spinner, a black katana, The Icicle, a Golden Chain, a Character Card, four Battle Cards, and five bricks.

Use ice dragon power to defeat the skull army!

Spin your way to victory and become a spinjitzu master! Zane is now a dragon ninja and has reached a level of spinjitzu ability that allows him to ride the Ice Dragon. No skeleton is a match for his white dragon suit and the Flail of Ice! Use the 4 battle cards included in the set to influence the battle. 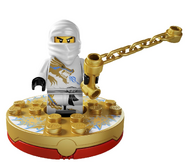 Zane DX on his spinner 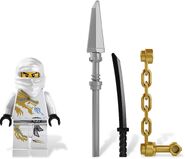 Zane DX with his weapons