This is about the spinner set. For the character, see Nuckal. For the card, see Card 7 - Nuckal.

2173 Nuckal is a Ninjago Spinners - pilot episodes set that was released in March 2011. It includes Nuckal, his Spinner, a Golden Double-Bladed Bone Axe, a Silver Dark Blade, a Chained Fang, a Character Card, four Battle Cards, and three bricks.

Spin your way to victory against the spinjitzu master! Fast as lightning and always looking for fun, Nuckal uses his electrifying laughter to win weapons and battle for glory! Use the 4 battle cards included in the set to influence the battle. 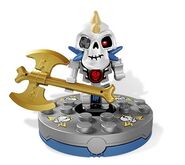