2174 Kruncha is a Ninjago Spinners - pilot episodes set that was released in August 2011. It includes Kruncha, his Spinner, a golden double-ended battle-axe, a Silver Bone, a Chained Fang, a Character Card, four Battle Cards, and three bricks.

Hard as rock and colder than stone, General Kruncha flattens anything that gets in his way. Spin your way to victory against the Spinjitzu masters and use the 4 battle cards included to influence the outcome. Set includes 1 earth optic spinner, 3 weapons, 1 character card, 4 battle cards and LEGO® bricks. 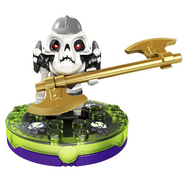