2175 Wyplash is a Ninjago Spinners - pilot episodes set that was released in August 2011. It includes Wyplash, his Spinner, the Golden Heli-Chains, a Silver Bone, a Groovy Whip, a Character Card, four Battle Cards, and three blue bricks to be used for decoration. 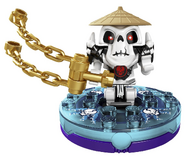