2254 Mountain Shrine is a Ninjago: Masters of Spinjitzu -pilot episodes set that was released in August 2011. It includes Kai DX, his Spinner, a training dummy, a Dark Chained Whip, a Double-Bladed Scythe, two Daggers of the Dragon's Breath, the Mountain Shrine, and the Sword of Fire.

Prepare for battle on the secret training grounds of the Mountain Shrine.

At the secret Mountain Shrine, Dragon Ninja Kai is in training to increase his dragon power. Help him get even tougher to protect the dragon sword of fire and treasure from the skeleton army! Spin to victory with the character card, 4 battle cards, and golden dragon spinner. 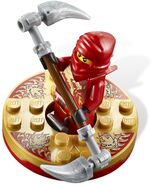 Kai DX on his spinner

Weapons in this set