2256 Lord Garmadon is a Ninjago: Spinjitzu Spinners - Pilot Episodes set that was released in August 2011. It includes Lord Garmadon, his Spinner, his Golden ThunderBolt, a Silver Dark Blade, a Double-Boned Skele-Scythe, his Character Card, four Battle Cards, and olive bricks.

Lead the skulkin army into battle against the Spinjitzu masters!

Terrifying Lord Garmadon, master of the power of destruction, is the son of the first Spinjitzu master and brother to Sensei Wu. Spin to victory against the Spinjitzu masters with 4 battle cards to influence the outcome. Set includes 1 optic spinner, 3 weapons, 1 character card, 4 battle cards and LEGO® bricks. 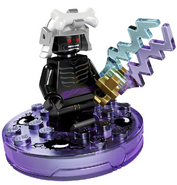 Lord Garmadon on his spinner

Lord Garmadon and his weapons
Add a photo to this gallery
Retrieved from "https://ninjago.fandom.com/wiki/2256_Lord_Garmadon?oldid=514657"
Community content is available under CC-BY-SA unless otherwise noted.