Become a master of Spinjitzu!

Spin your way to victory and become a Spinjitzu master! Build the Spinjitzu Arena, pick your character and play the cards to influence the outcome between Jay, the Master of Lightning, and Frakjaw, the toughest warrior in the Skeleton Army. Set includes 2 minifigures, 2 spinners, 6 weapons, 2 character cards, 8 battle cards, and enough LEGO® bricks to make the Spinjitzu Arena!

Jay on his spinner 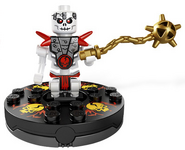 Frakjaw Minifigure
Add a photo to this gallery
Retrieved from "https://ninjago.fandom.com/wiki/2257_Spinjitzu_Starter_Set?oldid=538486"
Community content is available under CC-BY-SA unless otherwise noted.