2258 Ninja Ambush is a Ninjago: Masters of Spinjitzu - pilot episodes set that was released in January 2011. It includes Kai, Bonezai, the Scythe of Quakes, a Silver Sword, and a Silver Bone Axe.

Ambush the evil skeleton soldier and protect the golden scythe!

As part of his training to become the Spinjitzu Master of Fire, Kai is sent into the bamboo forest by Sensei Wu to protect the Golden Scythe. Hit the button to launch a surprise attack on Bonezai before he steals it! Set includes 2 minifigures and 3 weapons. 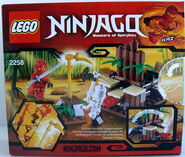