Not to be confused with Zane's Dragon itself, for that, see here, or here

2260 Ice Dragon Attack is a Ninjago: Masters of Spinjitzu - pilot episodes set released in January 2011. It includes Krazi, Zane DX, the Ice Dragon, the Shurikens of Ice, and a Katana.

Fly to the underworld on the Ice Dragon and reclaim the Shurikens of Ice!

Zane flies into the perilous realm of the underworld to recapture the stolen shurikens of ice from the skeleton army. Suddenly, Krazi appears out of the darkness and he has a different plan! Blast him with the Ice Dragon’s frozen breath before he gets away with the treasure! Set includes Ice Dragon, 2 minifigures and 2 weapons. 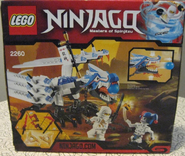 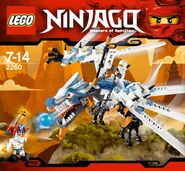