Battle in the area to win weapons!

Let the battle begin in the LEGO® Ninjago Battle Arena! Place your characters on the spinner, arm them with 14 different weapons and use the battle cards to spin your way to victory! Watch out for the deadly flick and ball shooters! Set includes 2 minifigures with special accessories, 2 spinners, 14 weapons, 2 character cards and 8 battle cards. 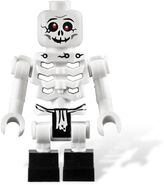