9440 Venomari Shrine
Not to be confused with the dragon itself

2521 Lightning Dragon Battle is a Ninjago: Masters of Spinjitzu - pilot episodes set that was released in August 2011. The set includes a Skulkin helicopter, Wisp, Jay DX, Sensei Wu, Frakjaw, Kruncha and his Spinner, the Nunchucks of Lightning, a Nin-Jô, a Silver Battle Mace, a Golden Dark Blade, and two Golden Spears.

Frakjaw and Kruncha have captured Sensei Wu and stole the nunchucks of lightning with their helicopter. Help Jay and the fearsome Lightning Dragon to rescue him and retrieve the golden weapon before they escape into the Underworld! Beware of the helicopter’s snapping jaws and flick missiles! Includes 9 weapons and a spinner. 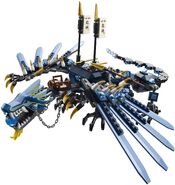