4659612 Spinner Crown
4636204 LEGO Ninjago Promotion is a Ninjago: Masters of Spinjitzu - pilot episodes set that contains a sword holder and a Golden Katana. A special Ninjago printed piece was included in this set.

It was available in December 2010 in Toys 'R' Us as a Ninjago Promotion. It was given away for free. 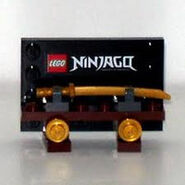 Add a photo to this gallery
Retrieved from "https://ninjago.fandom.com/wiki/4636204_LEGO_Ninjago_Promotion?oldid=630866"
Community content is available under CC-BY-SA unless otherwise noted.