5002144 Ninjago Battle Pack, also known as Dareth vs. Nindroid,[citation needed] is a Ninjago: Masters of Spinjitzu polybag set. It was released around September to December 2014, depending on the location, and includes Dareth and a Nindroid Warrior, as well as a "fake" trophy and a silver sai.

The set was a Toys "R" Us exclusive. 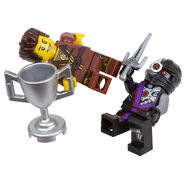