Join the Ninja heroes in elemental battle against the ultimate Ghost, Morro!

Defend the Ninja temple from Morro Dragon attack and battle Morro for the Aeroblade with this exciting LEGO NINJAGO Collection. In 70736 Attack of the Morro Dragon, team up with Kai and Jay on their Ninja jet boards to intercept the possessed Green Ninja as he swoops to attack the Tomb of the First Spinjitzu Master on his mighty dragon. Use the Aeroblades and all your Ninja skills to stop these ghoulish invaders from stealing the Realm Crystal! Then it's all aboard Destiny's Bounty for an aerial duel against Morro, the ultimate Ghost and Master of Wind, in 70738 Final Flight of Destiny's Bounty. Avoid the snapping jaws and swiping tail of the Ghost Dragon. Attack with the ship's triple-stud-shooting cannons and dual flick harpoon shooter and unleash the airbike to fend off Morro's Ghost Ninja and the menacing Skreemers.

In the CGI overview

In the Ninjago commercial 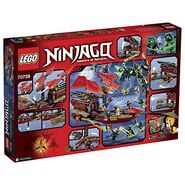 Spyder minifigure
Add a photo to this gallery

Retrieved from "https://ninjago.fandom.com/wiki/5004817_Ninjago_Collection?oldid=575742"
Community content is available under CC-BY-SA unless otherwise noted.