Were you looking for the 2017 movie set?

70501 Warrior Bike
70500 Kai's Fire Mech is a LEGO Ninjago: Masters of Spinjitzu - Legacy of the Green Ninja set that was released in December 2012. It includes Elemental Kai with his Fire Elemental Blade, a Stone Scout with a Crossbow, and the Fire Mech (whose design includes four golden blades and two golden katanas).

Help the ninjas to collect the 4 elemental blades and awaken the mythical golden mech! Lord Garmadon has sent his scout to snatch the elemental blade of fire from Kai but Kai is ready and waiting in his mighty Fire Mech! The scout's crossbow weapon is no match for the mech's huge double-edged fire blade and impenetrable armor. Battle for control of the elemental fire sword! Includes 2 Minifigures with weapons: Kai and scout. 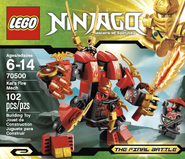 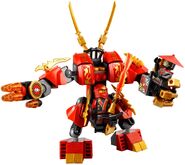