You may be looking for the Earth Driller itself, or the Legacy remake.

70503 The Golden Dragon
70502 Cole's Earth Driller is a Ninjago: Masters of Spinjitzu - Legacy of the Green Ninja set that was released in December 2012. It includes Elemental Cole, a Stone Swordsman, the Earth Elemental Blade, a katana, and the Earth Driller.

Lord Garmadon's swordsman has stolen the Elemental Earth Blade from Cole. If he escapes with it, the ninja won't be able to unite the 4 elemental blades and awaken the mythical golden mech. Race into action on the super-tough Earth Driller and take it back! Jump in the cockpit, fire up the engine and spin the drill! Plow through every obstacle with the Earth Driller to retrieve the Elemental Earth Blade before it's lost forever! Includes 2 minifigures with weapons: Cole and swordsman.

The first Ninjago model that I designed. I still love that dashboard sticker with the fly on it. Great graphics work by Kurt Meysmans.[2]

Front of the set box 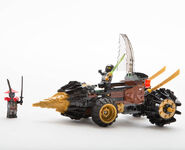 Elemental Cole and a Stone Swordsman