70590 Airjitzu Battle Grounds
70589 Rock Roader is a LEGO Ninjago: Masters of Spinjitzu - Day of the Departed set that released in most countries on June 1, 2016, but on August 1st, 2016 in the United States and Canada. It includes Cole RX, Lil' Nelson, a Stone Swordsman, a Stone Scout, the Elemental Departed Blade, the Rock Roader, and a small outpost for the Stone Army.

This mighty vehicle's offroader wheels and suspension means it can power across the roughest terrain. When you get the Stone Army's base camp in your sights, fire the 6-stud rapid shooter and detach Lil' Nelson's turret. Dodge the base camp's disc shooter. Spin the Rock Roader's dangerous rear driller and beware of the Stone Army warriors' Elemental Blade and stud-shooting crossbow. Then, attach the spinning driller to the front of the Rock Roader to smash their base camp and drive away victorious! 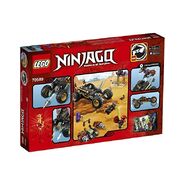 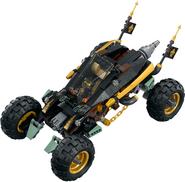 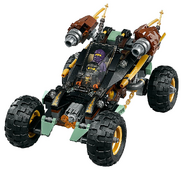 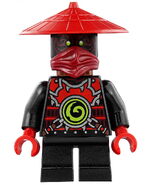