70594 The Lighthouse Siege
70593 The Green NRG Dragon is a LEGO Ninjago: Masters of Spinjitzu - Skybound set that released in most countries on June 1, 2016, but on August 1st, 2016 in the United States and Canada as a part of the Day of the Departed set wave. It includes Destiny Lloyd, Destiny Ghost Cole, Bucko, Cyren, Battle Doubloon, the Djinn Blade with Kai, the Energy Dragon, a small outpost, and a rolling catapult.

Place Green Ninja Lloyd on the saddle, grab the chain reins and launch into the air. Flap the Green NRG Dragon's huge wings to fly high and attack the sky pirates' lookout tower with its snapping mouth and dangerous talons. Swerve through the air to avoid shots from the pirates' mobile catapult and fire back with the stud shooters in the dragon's tail. Team up with Ghost Cole to triumph over Battle Doubloon and his crewmates and claim the Djinn Blade!

"A lot for first with this one, first time we in Ninjago have A dragon with brick build fouldable wings, I belive it is first time the bigfig arms have been used for somthing else than bigfig arms, and this is my first dragon/creature build. I had a lot of different builds, some more obscure than others. In the final design I used long time to get the wings just right so that you are able to have them fold in and out. The dragon is inspired of wyvern's that is a dragon with two legs and have a more bird looking silhouette."[2] 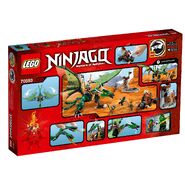 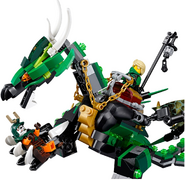 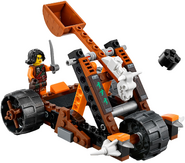 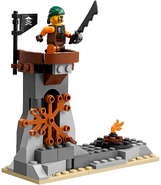 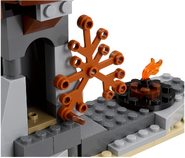