70602 Jay's Elemental Dragon
70601 Sky Shark is a LEGO Ninjago: Masters of Spinjitzu - Skybound set released in most countries on January 1, 2016, but on March 1st, 2016 in the United States and Canada. It includes Destiny Lloyd, Flintlocke, a Golden Chainsaw, a Golden Shuriken and the Djinn Blade, with Kai in it, the Sky Shark, and a small jet pack/drone for Lloyd.

Send up the drone to check out this awesome jet with dangerous blades, guns and loads of cool pirate details. And beware—the Sky Shark could drop dynamite or rotten fish at any moment! Then convert the drone into a jetpack for Lloyd and launch the Ninja hero into battle. Bring down the Sky Shark and fight to free trapped Kai from the Djinn Blade!

"We had a ton of different takes on a skypirate jet. Some more steam-punk than others. We ended going with a modern jet look mixed wit steam-punk. The biggest task was to optimize the drop function to be as small as possible."[2] 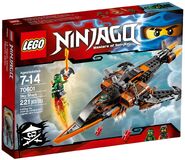 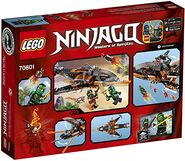