watch 02:03
Wiki Targeted (Entertainment)
Do you like this video?
Play Sound

70604 Tiger Widow Island
70603 Raid Zeppelin is a LEGO Ninjago: Masters of Spinjitzu - Skybound set released in most countries on January 1, 2016, but on March 1st, 2016 in the United States and Canada. It includes Destiny Zane, Clancee, Doubloon, the Djinn Blade with Jay in it, a small flyer for Zane, and the Raid Zeppelin.

Swerve clear of the Zeppelin’s powerful cannons and dynamite dropped through the trap door. Fire the flyer’s elemental ice stud shooters and board the airship. Face-off against Doubloon and Clancee to grab the Djinn Blade and free your fellow Ninja warrior Jay! 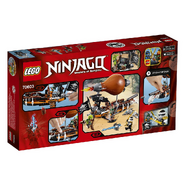 Back of the box.

The set in its entirety. 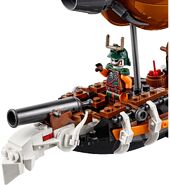 Clancee minifigure
Add a photo to this gallery

Retrieved from "https://ninjago.fandom.com/wiki/70603_Raid_Zeppelin?oldid=660244"
Community content is available under CC-BY-SA unless otherwise noted.