70605 Misfortune's Keep
70604 Tiger Widow Island is a LEGO Ninjago: Masters of Spinjitzu - Skybound set released in most countries on January 1st, 2016, but on March 1st, 2016 in the United States and Canada. It represents Tiger Widow Island and includes Destiny Nya, Destiny Ghost Cole, Battle Wu with an aviator helmet, Dogshank, Sqiffy, the Djinn Blade with Lloyd in it, Wu's hot air balloon, a hang glider for Sqiffy, the Tiger Widow, and the Tiger Widow's nest with a large temple above it.

Mighty Dogshank is approaching carrying her huge anchor weapon. Fight back with Nya’s katana and drop coconuts on Dogshank from the tower and Sensei Wu’s hot air balloon. Watch out for Sqiffy’s pirate flyer and make the palm tree fall to knock him off the ladder. Hide out in the cave—and beware of the giant venomous spider roaming the island! Defeat the pirate invaders and free trapped Lloyd from the special Djinn Blade!

"The second set that I designed. When we decided upon the theme of Sky Pirates, I knew that this was the perfect opportunity to make a land-based set that can't fly. Graphic Designer Dano made some awesome flag decorations, which play homage to the classic Islander sets, but with a spider twist."[2] 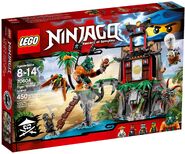 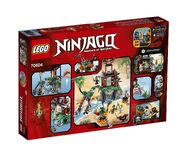 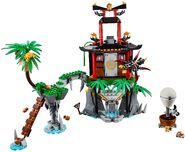 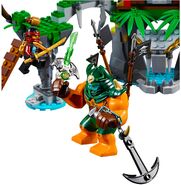 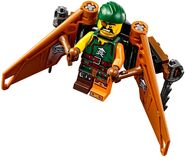 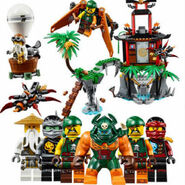