70588 Titanium Ninja Tumbler
70605 Misfortune's Keep is a LEGO Ninjago: Masters of Spinjitzu - Skybound set that released in most countries on January 1, 2016, but on March 1st, 2016 in the United States and Canada. It includes Destiny Jay with exclusive eyepatch face printing, Destiny Kai, Destiny Lloyd with armor, Nadakhan, Flintlocke, Bucko, Monkey Wretch, the skeleton figurehead, the Djinn Blade with Wu in it, the Misfortune's Keep, a small pirate jet, and a "booster jet" for Lloyd.

Launch a surprise attack on the sky pirates’ awesome HQ!

The evil Djinn Nadakhan and the crew of Misfortune’s Keep are threatening to destroy Ninjago. Soar sky-high with Lloyd’s booster jet and operate the winch to lower Jay into battle. Beware of Misfortune’s Keep’s hidden cannons, disc shooters and the pirate jet taking off from the launchpad. Can you help the Ninja to defeat Nadakhan and free trapped Wu from the golden Djinn Blade? 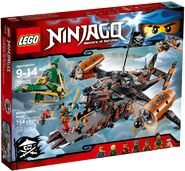 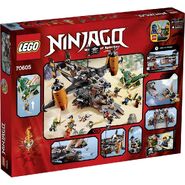 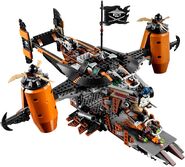 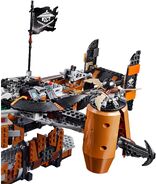 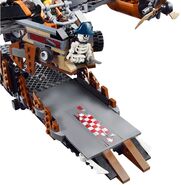 Front of the ship with the skeleton figurehead 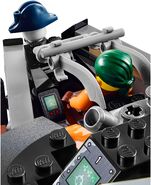 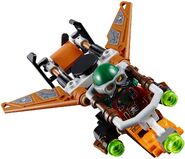