Ninjago Wiki
Register
Don't have an account?
Sign In
Advertisement
in: Sets, 2017 sets, The LEGO Ninjago Movie,
and 3 more
English

70629 Piranha Attack
70620 Ninjago City is a set for The LEGO Ninjago Movie that was released on September 1, 2017. The set is the seventh-largest LEGO set of all time in terms of its piece count, as well as the 2nd largest Ninjago set, with the first being 71741 Ninjago City Gardens.

Enjoy endless role-play fun in NINJAGO® City, a hugely-detailed 3-level model connected by a sliding elevator. Level 1 features a traditional fish market, house, a bridge over a stream, and a fishing boat. The second level has a modern fashion store, comic book store, crab restaurant with ‘crab-grilling’ function and cash-dispensing ATM. The vertical city is topped off with Lloyd Garmadon and Misako’s apartment, a rooftop sushi bar with sushi conveyor belt, and a radio tower. This action-packed THE LEGO® NINJAGO MOVIE™ set also includes 16 minifigures and Sweep the maintenance robot.

"This is the fifth and final set that I designed for Ninjago, together with Christopher Stamp and a little bit of invaluable help from Niek. The model went through at least 4 complete redesigns and iterations, and countless physical and digital sub-builds as it grew alongside the Ninjago City seen in the film. Being able to work on this set was a dream come true - I had the freedom to draw inspiration from all over the film city, and distill that spirit into a single modular block.

Early in development I collected draws full of interesting techniques and details, which we sprinkled through the model where it made sense. It's hard to pick favourites, but I'm particularly proud of the variety of roof techniques for shingles seen throughout the model, and the new square railing element - you get a lot to play with! Niek made an amazing function, which can deep-fry crabs (or Gold bananas)! We managed to fit in a lot, but there were many more ideas leftover that will hopefully find their way into future models... there's also a traffic cone on top of the radio tower - I'm not sure how it got there.

There are a lot of decorations, minifigures and stickers, made by Djordje and Lars. Ninjago City is full of billboards and bright signage, so to recreate this variety, we knew that we'd have to use a lot of stickers. We aimed to make them as much fun as possible, adding in references to the film, classic LEGO themes and more. A Ninjago script/cipher was developed for the film, which we used to encode a lot of fun messages, and add extra depth to the world seen in the model. I'm hoping that these stickers will also be useful for people wanting to build their own creations!

It was an incredible amount of fun and work to make - pushing the limits on size, techniques, stickers and fun. It wouldn't have been possible without Chris, the Ninjago design team, and countless others! I'm glad it turned out okay!"[3] 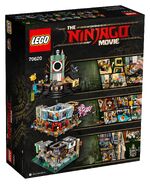 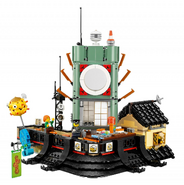 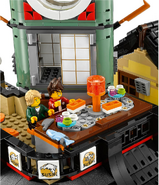 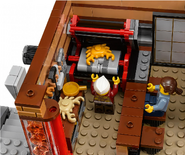 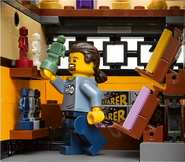 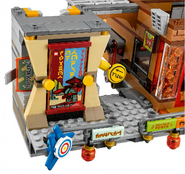 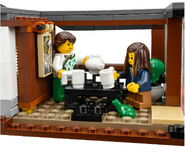 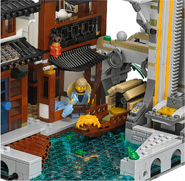 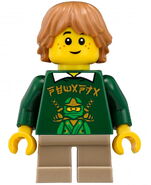