Ninjago Wiki
Register
Don't have an account?
Sign In
Advertisement
in: 2017, Sets, The Hands of Time,
and 7 more
English

70622 Desert Lightning
70621 The Vermillion Attack is a LEGO Ninjago: Masters of Spinjitzu - The Hands of Time set released on January 1, 2017. It includes a slightly changed Fusion Kai, Rivett, Slackjaw, a large Vermillion egg, and the Forward Time Blade.

Battle the Vermillion to win the Fast Forward Time Blade!

Stage a swamp battle between Kai and Vermillion warriors Rivett and Slackjaw to win the Forward Time Blade. This LEGO® NINJAGO® set features a Vermillion egg with an explode function that releases three red snake elements from inside, plus cool minifigure weapons to dial up the role-play conflict. Includes three minifigures.

The first set i worked on! quite a challenge to get that egg pop but a good start to a new adventure in Lego. Done with the help and mentorship of Christopher Stamp[2] 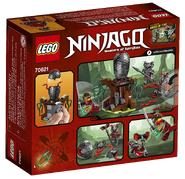 Kai with the Forward Time Blade