Watch out for the mighty egg-launching Vermillion Invader!

Help Zane escape with the Forward Time Blade under attack from Commander Raggmunk and Slackjaw’s Vermillion Invader. The Invader has two minifigure cockpits, a rubber track and a spring-loaded dual egg catapult to knock down the included barrier—and any minifigure trying to hide behind it. Commander Raggmunk and Slackjaw are armed with Vermillion swords and an axe and Zane has a katana to add to the role-play battle action. Includes three minifigures. 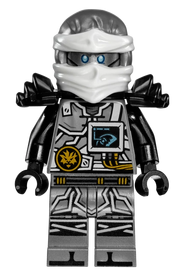 Slackjaw Minifigure
Add a photo to this gallery

Retrieved from "https://ninjago.fandom.com/wiki/70624_Vermillion_Invader?oldid=557941"
Community content is available under CC-BY-SA unless otherwise noted.