Ninjago Wiki
Register
Don't have an account?
Sign In
Advertisement
in: 2017, 2017 sets, The Hands of Time,
and 8 more
English

Take on the sinister Snake Mech with Lloyd and Jay!

Join Lloyd and Jay’s mission to free Master Wu and stop the Time Twins taking control of time in this Dawn of Iron Doom set, which includes the highly posable Snake Mech with wheel-operated spinning Time Portal and plug-in points for the four included translucent-colored Time Blades, a missile-shooting eye and two big detachable blade weapons. The Vermillion swamp fort has an egg-drop function and opening prison, and can be built in different ways for alternative layouts. Includes six minifigures with assorted weapons to intensify the role-play battles.

"During the early stages, I explored the look of the swamp and the Vermillion colour scheme / aesthetic. I suggested the half snake element, so that we could build snakes into the Vermillion soldiers and their vehicles. Leo made the final Iron Doom mech, which ties the faction together as a whole."[2] 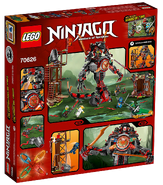