Ninjago Wiki
Register
Don't have an account?
Sign In
Advertisement
in: 2017, 2017 sets, The Hands of Time,
and 12 more
English

Swoop to conquer the Dragon’s Forge with Kai and Nya on the Fusion Dragon, rescue their parents from the Vermillion and claim the Reversal Time Blade. The Dragon’s Forge building has loads of play-starting features and functions, including a hidden Dragon Dagger to activate the turning chimney function, a blacksmith’s hammer function, and a leisure area. The highly posable, two-headed Fusion Dragon has seats for two minifigures and a shooting crossbow to take on the buildable Buffmillion mech. It also includes six minifigures with weapons to increase the role-play battle options.

"When we knew that we wanted to do a dual dragon we went out and build several completely different takes on this concept. We ended up with a simple design that had the mixing of fire and water running down the back of the dragon.

For the forge itself I wanted to have a big play space but still try and have the opportunity to close up the build. I tried to put in a lot of small play functions that tied in to crafting weapons. That is why we in the instructions give ideas to how you can rebuild the weapons in the set."[2] 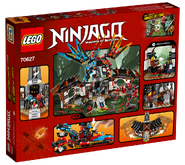 From the product animation 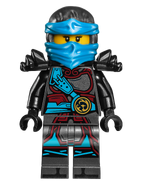