Ninjago Wiki
Register
Don't have an account?
Sign In
Advertisement
in: Ninjago, Sons of Garmadon, 2018,
and 7 more
English

70641 Ninja Nightcrawler
70640 S.O.G. Headquarters is a Ninjago: Masters of Spinjitzu - Sons of Garmadon set that released in 2018. It includes Spinjitzu Masters Lloyd, "Snake Jaguar", Ultra Violet, Nails, Skip Vicious, the Oni Mask of Hatred, a gold, ripcord-activated spinner, Skip Vicious' Oni Bike, and the S.O.G. Headquarters, with a prison cell, a large door, a workshop, and a number of obstacles for the aforementioned spinner.

Crash into the S.O.G. Headquarters with the Lloyd Spinjitzu spinner and claim the Oni Mask of Hatred, with this action-packed LEGO® NINJAGO® set. The dojo features spinning weapons, movable sides and an Oni Bike to attack the spinner. Unleash the spinner to knock over rivals or the ATM and to smash through the dojo entrance to release the Oni Mask of Hatred element. This building toy also has 5 minifigures, including Zane as his undercover persona, Snake Jaguar.

"Designing a LEGO set that works both as a great action toy and a great play set is not an easy task. That was also the case with this set.

Lot of the work went in to figuring out how to create a play space that worked with the new spinner, figuring out how it could have different activators so no matter how you shot in the spinner something happens.

As a kid I always made small challenges for my self when i was playing with my toys. I tested my toy cars frequently to see what car role the longest crashed the hardest etc. This set i designed with this in mind. It lends itself great to the idea of playing by you self with the spinner and see if you can hit the things or knock over the bike or run through the doors.

The Small bike was created as a collaboration between Dimitrios and me as a fun one day build challenge."[2] 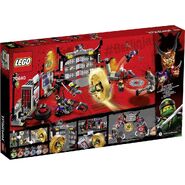 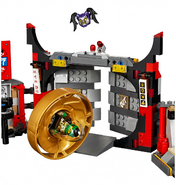 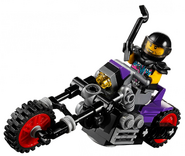 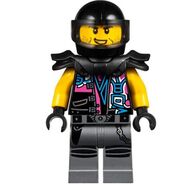