70652 Stormbringer
70651 Throne Room Showdown is a LEGO Ninjago: Masters of Spinjitzu - Hunted set released on June 1, 2018, in most countries and on August 1, 2018, in America and Canada. It includes an unmasked Hunted Lloyd, Hunted Nya, Resistance Skylor, Samurai X 2.0, Quiet One Harumi, and a segment of the Royal Palace, including a balcony, and lastly a throne that hides a key for the prison cell next to it.

Team up with Nya, Skylor and Samurai X to break into the Palace of Secrets’ throne room, overpower Harumi and rescue Lloyd. This exciting LEGO® NINJAGO® 70651 Throne Room Showdown set features a throne room, throne with 6 detachable weapons and a secret compartment for the jail key, smashing wall function and a jail. This set also includes 5 minifigures with assorted weapons to boost the role-play ninja action. 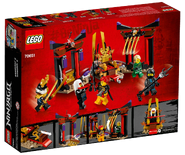