Not to be confused with the dragon.

70653 Firstbourne
70652 Stormbringer is a Ninjago: Masters of Spinjitzu - Hunted set released on June 1, 2018, in most countries and on August 1, 2018, in America and Canada. It includes Hunted Jay, Hunted Zane, Muzzle, Daddy No Legs, the Dragonbone Blade, Stormbringer, and an anvil with the Dragon Chestplate atop it.

Fly LEGO® NINJAGO® 70652 Stormbringer the Lightning Dragon with Jay and battle against Daddy No Legs and Muzzle to claim the Dragon Armor. Fire spring-loaded ‘lightning bolt’ shooters from the mouth of this highly posable dragon, which also features a removable minifigure saddle, swiping tail function and attachment points for the Dragon Hunter Daddy No Legs to hook the dragon. This set also includes a pedestal to hold the collectible Dragon Chestplate element, plus 4 LEGO NINJAGO minifigures with assorted weapons—including the collectible Dragonbone Blade—to boost the role-play battles.

"Your first Ninjago Dragon is always a milestone in this theme. One i was lucky to reach quite fast! I love dragons and designing one of a more rare style, inspired by asian style dragons, and shooting lightning bolts from its mouth was deffinitely fun."[2] 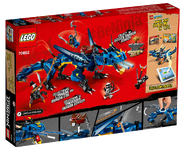 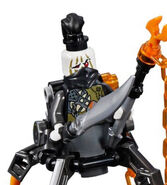