70657 Ninjago City Docks
70658 Oni Titan is a Ninjago: Masters of Spinjitzu - Hunted set released on June 1, 2018, in most countries and on August 1, 2018, in America and Canada. It includes Hunted Lloyd with a flag on his back, unmasked Hunted Nya, Reborn Garmadon, Quiet One Harumi, and Garmadon's Colossus.

"This was my first "mech" I build. I wanted to play with odd proportions to give a sense off scale in the model. In the show, this is a giant stone colossus and the challenge was how to capture that in the product.

The model was created in parallel with the writers finishing up the story for the season finale where it appears. This gave an opportunity to have a close collaboration with the writers of how they were seeing it and how they want to use it. we went through many different looks, somewhere closer to the Oni silhouette with giant horns and somewhere more human-like."[2] 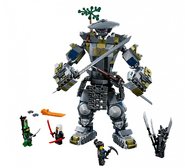 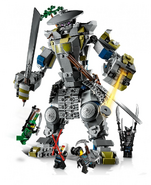 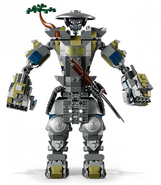 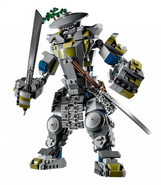 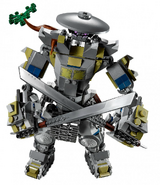