Not to be confused with the actual castle.

Play out ninja battles against the Ice Emperor, General Vex and the Blizzard Samurai warriors with this ice castle toy playset for boys and girls. The LEGO NINJAGO 70678 Castle of the Forsaken Emperor building features the Ice Emperor’s throne with a throne-reveal function, 2 towers—1 with a stud-shooting crossbow—and a separate ice tower with a spring-loaded shooter and an opening ice prison. Kids will love recreating scenes from the NINJAGO TV show and role-playing their own stories with 7 minifigures, a posable Ice Dragon toy and lots of cool weapons and accessory elements, including the Ice Emperor’s Scroll of Forbidden Spinjitzu weapon and Lloyd FS’s new-for-June-2019 tornado spinner toy.

"For this lineup of products, we wanted to go close to what a castle line could be. The good thing about Ninjago is that it can be both high-tech and low tech at the same time.

The castle was inspired by the iconic Japanese castles And taking inspiration of classic Ninjago Fire castle with having a build-in transformation feature.

The "dragon" (or wyvern) was created in a way where scale should play in, that's why it has a smaller head than normal. I created the dragon so if you place it behind the throne and fold out the wings it will create a backdrop for the full castle like the Fire dragon did in the fire temple. This was never comunicated on the box or elswear."[2] 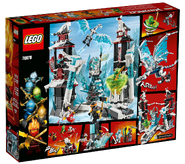 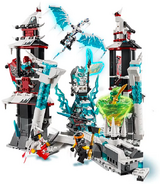 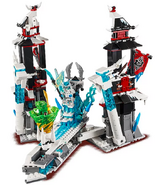 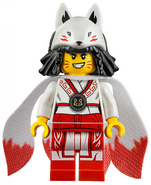 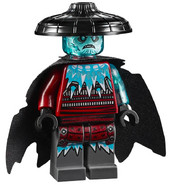