This article is about the original set. You may be looking for the Legacy remake.

Take on General Cryptor with the red-hot Kai Fighter!

Kai has taken over a civilian vehicle and used his Techno-Blade to turn it into an awesome red and gold Ninja Fighter! Take off and weave between the skyscrapers of New Ninjago City with Kai in the cockpit. Shoot the gold-tipped flick missiles into the path of the evil General Cryptor and evade blasts from his ground-to-air laser rocket launcher. Defeat General Cryptor then flip the wings back to engage speed mode and zoom away. Includes 2 minifigures with weapons and an accessory: Kai and General Cryptor. 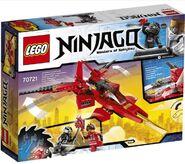 Back of the set's box 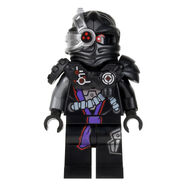