You may be looking for the 2020 Legacy remake.

70724 NinjaCopter
70723 Thunder Raider is a Ninjago: Masters of Spinjitzu - Rebooted set released in December 1, 2013. It includes Techno Cole and Techno Jay in the Earth Mech and Lightning off-roader, which can combine into the Thunder Raider. Opposing them is a Nindroid Warrior, manning the double laser cannon with Jay's Techno Blade.

Take on the Nindroids with the awesome Thunder Raider!

Team up Cole and Jay against the Nindroids with Thunder Raider, a versatile Ninja vehicle full of hidden surprises. Attach Cole’s Earth Mech to the back of Jay’s lightning off-roader. Engage speed mode and power effortlessly over rough terrain with the high-grip front tank treads and huge rear wheels. When the Nindroid attacks with its double laser cannon, detach Cole’s Earth Mech and fight back using the golden sword blasters. Transform the awesome Thunder Raider into attack mode to shoot hidden missiles and reload until the Ninjas are victorious! Includes 3 minifigures with weapons: Cole, Jay and a Nindroid.

One of my latest sets and definitely my favorite so far. The size is perfect for play, you get three models that provide a lot of play, you have the modularity, the diversity between models and even a fun function that doesn't need a lot of technic. The function on the thunder raider works with the help of the new "A-plate" which I helped design. I have been unable to leave this element out of any models I've been designing since. It opens up a lot of posibilities for someone like me who loves to challenge the straight lines that LEGO bricks are usually restricted to.[2] 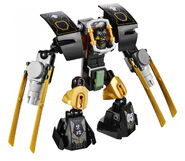