Fold out the rapid shooters and take down the Ghost Dragon!

Ride Cole’s Blaster Bike into battle and protect the Aeroblade! The Ghost Warrior Cowler is armed with a deadly Ghost Blade Sword and is launching an aerial attack on a Ghost Dragon. Fold out the awesome dual six-shooting rapid shooters to take down the flying beast. Speed away from the pair of Skreemers trying to turn Cole into a ghost and don’t let them get their hands on the Aeroblade! Includes 2 minifigures with assorted weapon elements and an accessory element: Cole and Ghost Warrior Cowler. 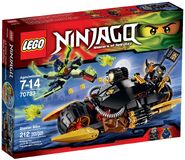