70735 Ronin R.E.X.
70734 Master Wu Dragon is a LEGO Ninjago: Masters of Spinjitzu - Possession set released on June 1, 2015. It includes Master Wu's dragon, a small tea farm, a cart, Wu, Deepstone Cole, Soul Archer, Pitch, Hackler, a Skreemer, and Wu's dog. Weapons include an Aeroblade, a Katana, four Golden Katanas, a golden sai, a black Ninja Bow, a black crossbow, a ghost sword, and a gold-and-black ax. Features of this set include posable joints on the dragon and a tile shooter on a ghost cart.

Protect the Aeroblade from the Bow Master Soul Archer and his ghost army with the Master Wu Dragon! Dodge the Ghost discs fired from the possessed rickshaw and fight back with the tea farm’s flick missiles. Beware of the Skreemer carrying a bottle of ghost poison and trying to turn Cole into a ghost. The Ghost Ninja need the Aeroblade to fulfill their evil master plan, so use all your Ninja skills to defend it! Includes 5 minifigures with assorted weapon and accessory elements: Master Wu, Cole, Bow Master Soul Archer, Ghost Warrior Pitch and Ghost Ninja Hackler.

"First set that I designed! During the sketch phase I was exploring fire dragons for Kai, but when the Uni-Kitty moustache on one of the models looked particularly wise, Simon (my creative lead) asked me to see what a dragon for Master Wu would be like instead!"[2] 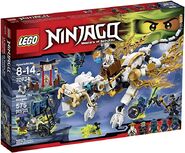 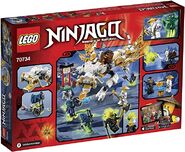 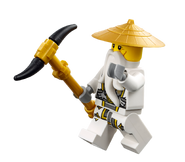