70747 Cole's Boulder Blaster
70746 Condrai Copter Attack is a Ninjago: Masters of Spinjitzu - Tournament of Elements set released in March 2015. It includes Skylor, Master Chen, Eyezor, a Condrai Copter, and a rocket board.

Can Chen net Skylor with the Condrai Copter?

Evil Chen and Eyezor are pursuing Skylor through the island’s jungle in the Condrai Copter. Help Skylor to escape on her flying rocket board, swerving away from the Condrai Copter’s flick missiles and evading the huge net shot from the snake’s mouth. Dial up the high-octane thrills as the bad guys flip the wings into attack mode, leap out of the double cockpit and hang off the side handlebars. Speed out of there before they can swoop down and capture Skylor! Includes 3 minifigures with assorted weapons: Skylor, Chen and Eyezor.

Promotional image from LEGO.com of the characters included 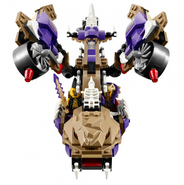