70749 Enter the Serpent
70748 Titanium Dragon is a Ninjago: Masters of Spinjitzu - Tournament of Elements set released in March of 2015. It includes Titanium Zane, Clouse, Chop’rai, the Titanium Dragon, and a small outpost.

Ride to freedom on the Titanium Dragon!

Break out from captivity with Titanium Zane on the monstrous Titanium Dragon! Saddle up with the Ninja hero and ride the intimidating armored dragon into combat. Open the mouth to bare its sharp teeth and adjust the head, wings, legs and tail for a variety of fearsome battle poses. Escaping will be tough because Clouse and Chop’rai lie in wait at the Anacondrai outpost, which has many weapons. Fend off Chop’rai’s attacks with the Anacondrai Blade. Watch out for the dangerous chain bola fired from the catapult and escape to victory with Zane! Includes 3 minifigures with assorted weapons: Titanium Zane, Clouse and Chop’rai. 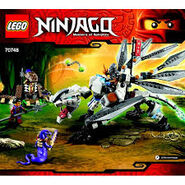 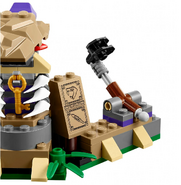