You may be looking for 2020 Legacy remake.

70756 Dojo Showdown
70755 Jungle Raider is a Ninjago: Masters of Spinjitzu - Tournament of Elements set released on March 1, 2015. It includes Lloyd's Jungle Raider and a mini-tower to hold Lloyd's Jadeblade. The Jadeblade is guarded by Kapau.

Overpower the Anacondrai with the awesome Jungle Raider!

Kapau has chained the Jade Blade to a stone pillar deep in the jungle and is standing guard with his double-bladed dagger. Place Lloyd in the cockpit of the Jungle Raider and begin a mission to claim the precious blade. The built-in suspension and big rubber tires makes driving over rough jungle terrain a breeze. Aim the powerful spring-loaded dual shooter at Kapau and the stone pillar. Overcome the Ancondrai warrior and unchain the Jade Blade! Includes 2 minifigures with assorted weapons: Lloyd and Kapau.

The set in LEGO Ninjago: Tournament 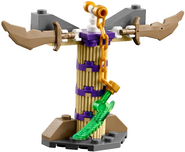