You may be looking for the Legacy remake.

70730 Chain Cycle Ambush
70756 Dojo Showdown is a Ninjago: Masters of Spinjitzu - Tournament of Elements set that was released in March 2015. It includes Tournament Kai, Karlof, Griffin Turner, Sleven, the Jadeblade Scythe, and a Dojo filled with traps.

Battle for the Jade Blade in the Dojo Showdown!

Join Kai for a thrilling Tournament of Elements showdown at the Dojo! Show speed and agility to dodge the dangerous spinning blade bot and climb the wall parkour-style. Grab the chain or take the steps to reach the top of the Dojo, but beware of the poison dart flick missiles. Battle against Griffin Turner and Karlof, evading Karlof’s huge crushing hands, and grab the Jade Blade. Just don’t fall through the trapdoor into the fire prison because there’s no way out! Includes 4 Minifigures with weapons: Kai, Sleven, Griffin Turner and Karlof. 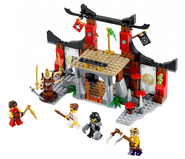 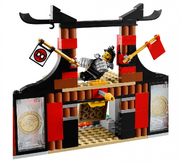 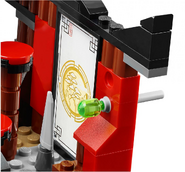