You may be looking for the Lightning off-roader or Earth Mech themselves, or the original set.

71700 Jungle Raider
71699 Thunder Raider is a Ninjago set that released on January 1, 2020, as a part of Ninjago: Legacy Wave 2. It includes Jay, Cole, Lloyd in their Legacy (sleeveless) robes, the Overlord, and a Nindroid Warrior in their Legacy redesigns and Lightning off-roader and Earth Mech, which can combine into the Thunder Raider.

The Thunder Raider (71699) with 5 minifigures is the perfect cool toy for kids who love Ninja Mechs and vehicles. This is a 2-in-1 adventure toy that presents a world of exciting play possibilities. Children can build the bulked-up vehicle and then choose to detach the mech from the back and share the fun with friends by playing with one ninja toy each. The perfect LEGO® gift for kids Kids can celebrate the rich history of LEGO NINJAGO® by building this cool Legacy ninja mech playset, which is an upgraded version of the action toy from season 3 of the TV series. Kids can recreate famous battles between the ninjas and Overlord and the Nindroid Warrior. The best building toys for kids LEGO NINJAGO ninja playsets let kids enter an action-packed fantasy world where they can indulge in imaginative play as the mini ninjas take on the forces of evil. Kids will be completely enthralled as they role-play with ninja builds, NINJAGO mechs, cars, dragons and temples.

Getting to reinterpret such a fan favorite as as well as a set designed by a designer I look up to (Adrian Florea https://brickset.com/sets/list-9388) was a great pleasure.

It's no secret that I love mechs and Cole and Jay are my favorite ninjas, so this was perfect. I tried to keep the attitude of the original. I wanted to take some of the most defining shapes of the original and blow them up to create a kind of caricature.

For the raider, I focused on the triangular plating on top that converges in one point. By using the tail rudder, I found a neat and new way to cover the back of the tracks a little bit.

For the mech, I wanted to really accentuate the big feet/lower legs and the shoulders. Because he needed to be folded up on the back of the raider, he needed knees, which I didn't mind."[2] 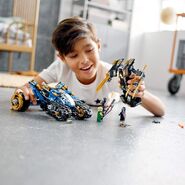 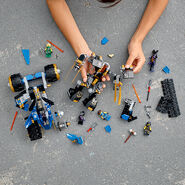