71701 Kai's Fire Dragon
71700 Jungle Raider is a LEGO Ninjago: Masters of Spinjitzu set that released on January 1, 2020, as a part of Ninjago: Legacy Wave 2. It includes Legacy (Sleeveless) Lloyd and the Jungle Raider.

Kids who love bringing to life classic LEGO® NINJAGO® Legacy adventure toys and have a passion for playing with toy buggys will be thrilled with this Jungle Raider (71700). After assembling it from building bricks they can plot exciting action scenes from the Tournament of Elements as the ninja action figure of Lloyd enjoys epic adventures in the jungle. A new and exciting way to build cool toys for kids Instructions PLUS offers a digital and interactive guide to building this jungle toy. Available in the free LEGO Life app, it has zoom-and-rotate viewing tools to help young children build this cool LEGO building brick model. The best building kits for kids LEGO NINJAGO adventure toys give kids a passport to an action-packed world where they can express themselves with independent play as they create stories around the ninja warriors. Youngsters are guaranteed endless fun as they play with a range of ninja toys, including jungle toys, jet planes, dragons, NINJAGO vehicles and more. 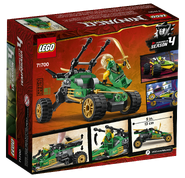 Legacy (Sleeveless) Lloyd minifigure
Add a photo to this gallery

Retrieved from "https://ninjago.fandom.com/wiki/71700_Jungle_Raider?oldid=513823"
Community content is available under CC-BY-SA unless otherwise noted.