LEGO® NINJAGO® fans can recreate famous scenes from season 1 of the TV series with this upgraded legacy red dragon toy and 2 Minifigures. Kai’s Fire Dragon (71701) must stop Lord Garmadon snatching the Sword of Fire from the mini fire temple. Kids are sure to be entertained for hours as they escape into this fantasy world. The new way to build toys for kids LEGO fans now have a new and interactive way to build this dragon toy figure: the digital Instructions PLUS via the free LEGO Life app on smartphones and tablets. Zoom, rotate and view this ninja dragon as it comes to life on a screen and in front of you. Welcome to 4+! LEGO NINJAGO® 4+ toys offer preschool kids a gateway to an action-packed world where they can let their imaginations run wild as they learn to build their favorite characters, vehicles and buildings. With Starter Brick bases to make the process simpler, these sets are specially designed so first-time builders can experience the pride of constructing all on their own. 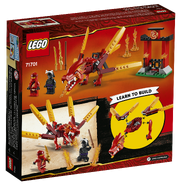 Legacy Fire Dragon
Add a photo to this gallery

Retrieved from "https://ninjago.fandom.com/wiki/71701_Kai%E2%80%99s_Fire_Dragon?oldid=454704"
Community content is available under CC-BY-SA unless otherwise noted.