Not to be confused with the actual mech, or you maybe looking for the 2013 original version of the Golden Mech.

71706 Cole's Speeder Car
71702 Golden Mech is a Ninjago set that released on January 1, 2020, as apart of the second wave of Ninjago: Legacy. It includes Legacy Golden Lloyd, Wu, Kozu, and a Stone Scout in their Ninjago: Legacy redesigns, the Ice Elemental Blade, and the Golden Mech.

This LEGO® NINJAGO® Legacy mech playset with 4 ninja action figures will be adored by fans of the TV series, who are passionate about recreating action scenes from season 2. Kids can enjoy the fun on their own or share group play with friends as they role-play battles with 4 minifigures: Golden Ninja Lloyd, Wu and the NINJAGO stone warriors General Kozu and Stone Army Scout. Cool toys for kids Youngsters can now build this ninja mech in a new and exciting way by using Instructions PLUS via the free LEGO Life app. Creative kids can zoom, rotate and watch this awesome ninja toy come to life both on smartphones and tablets and in front of them. Awesome ninja toys for kids! LEGO NINJAGO building toys for kids allow them to enter a world of non-stop thrills and adventure where they can join forces with their ninja heroes to take on the forces of darkness. NINJAGO fans will be captivated as they play with awesome action toys, including LEGO NINJAGO mechs, cars, dragons, temples, buildable figures and more.

"Even though the golden mech dont have a big role in the Ninjago Tv-show, the set holds a great spot in the ninjago portfolio. So being able to reimagine the old wesion in to a new form was great. the original one came as part of the temple of light playset but we wanted to give a bit more love to the mech and have it as a standalone set. The Original sketch model was created by Leonardo that is just one of the mech experts we have in the team, so it gave a good starting ground for this model.

The challenge in the creation of a golden mech is how much gold can we put in to the mech. In LEGO we have a high level of quality control, this does that not all elements are able to be used with the molded gold material. therefor the challenge in this set was to find elements that we can use in gold and get as much of a golden surface as possible. The original mech had a lot of white in it as well so that is used in this set as well."[2] 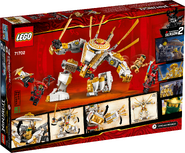