This article is referring to the Legacy version of the Kai Fighter set. You may be looking for the original.

71704 Kai Fighter is a Ninjago: Masters of Spinjitzu set that was released in most countries on June 1, 2020, in most US stores on August 15, 2020, and in Canada and LEGO stores in the US on August 24, 2020, as part of the third Ninjago: Legacy wave. It includes Legacy (sleeveless) Kai, Legacy (sleeveless) Lloyd, two Legacy Nindroid Warriors, the Kai Fighter, and a small Nindroid turret that is equipped with a single spring-loaded shooter.

Ninja fans who love creating iconic LEGO® NINJAGO® Legacy playsets and have a passion for playing with fun toys and buildable figures will be enthralled by the Kai Fighter (71704). This stunning building set for kids features a toy jet and 2 ninja and 2 Nindroid Warrior action figures.

The perfect ninja toy for creative fun. Celebrate the famous history of NINJAGO by building this cool LEGO NINJAGO Legacy set, a modern and upgraded action toy from season 3 of the TV series. Kids will enjoy the fun challenge of putting it together from building bricks before staging epic ninja battles between Kai and Lloyd and the Overlord’s Nindroid Warriors.

The best ninja playsets LEGO NINJAGO ninja toys offer youngsters a gateway into a world of fantasy fun where they can indulge in creative play as they role-play stories with NINJAGO action figures. Your little ninja will be captivated as they play with a range of action toys, including ninja jets, mechs, vehicles and dragons. 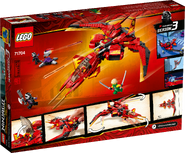