71717 Journey to the Skull Dungeons
71705 Destiny's Bounty is a Ninjago set that was released in most countries on June 1, 2020, in most US stores on August 15, 2020, and in Canada and LEGO stores in the US on August 24, 2020, as a part of the third wave of Ninjago: Legacy. It includes Kai, Jay, Zane, and Cole in their Legacy (Dragon) robes, Legacy Wu, Legacy Samurai X 2.0, Legacy Young Lloyd Garmadon, all four Golden Weapons, and the Destiny's Bounty.

Spectacular LEGO NINJAGO Boat set Little ninjas can enjoy plotting their own NINJAGO® epic adventures with this action-packed and interactive ninja playset, an updated version of the NINJAGO boat from season 1 of the TV series. Kids will love firing up their imaginations with this NINJAGO Destiny’s Bounty set.

Fun toys for creative play LEGO NINJAGO building sets for kids allow them to enter a world of gripping adventure where they can team up with their ninja heroes to take down an array of evil villains. NINJAGO fans will be captivated with a range of playsets, boats, cars, dragons, temples and buildable figures.

"Set i designed for the Ninjago 2020 Legacy line. It is a huge milestone for me tackling the most iconic part of Ninjago, the theme that kicked off my career as a LEGO Designer. I tried to stay as close as possible to the look present in the show while making something in the league of the incredible Ninjago Movie Destiny's Bounty."[2] 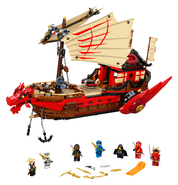 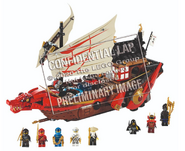 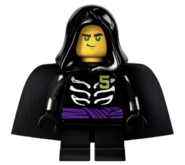