Ninjago Wiki
Register
Don't have an account?
Sign In
Advertisement
in: 2020, Ninjago, Ninjago: Masters of Spinjitzu,
and 10 more
English

Not to be confused with the actual Mech Jet.

71708 Gamer's Market
71707 Kai's Mech Jet is a 2-in-1 Ninjago - Prime Empire set that was released on January 1, 2020. It includes Digi Kai, Richie, the Orange Key-Tana within a loot box, Richie's hoverboard and the Mech Jet, which can be built into either the Jet form or the Mech form.

Kai’s Mech Jet (71707) is the ideal birthday gift for kids who love LEGO® NINJAGO® Mechs and Toy Planes. This is a 2-in-1 toy playset, which increases building and play possibilities. Kids can choose for it to be a toy jet plane or a mech toy for exciting adventures in Prime Empire with NINJAGO Kai. The fun new way to build LEGO gifts Instructions PLUS offers an interactive guide to build this toy jet and mech toy and makes it even more fun. Available in the free LEGO Life app; it has zoom and rotate viewing tools to help youngsters build independently. The perfect guide to create this toy playset. The best building kits for kids LEGO NINJAGO buildable toys let kids enter a mystical world where they can indulge in imaginative play as a team of mini ninjas take on the forces of evil. Kids will be completely enthralled as they role-play with toy jets, NINJAGO Mechs, speeders, dragons and temples. 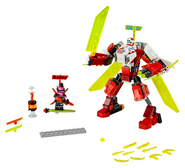